I love Halloween. One of my favorite things to do is to load up on the horror and thriller films. Detailed below are my recommendations currently available on various streaming services. The films here are certainly not mainstream and, by and large, foreign. Let me know if you have seen any of these. Let me know if see any based on my recommendations. I would love to hear your thoughts.

Rabid Dogs: A new French favorite of mine. The ending was so unexpected that the following day I watched it again to see what clues I may have missed. Rabid Dogs has my highest recommendation of all the films on this list. A must watch. There is even a rendition of my favorite Radiohead song “Creep” in the soundtrack.

High Lane: This is a French film and pretty intense. If you can take it…you have been warned…seriously.

Horde: A French zombie film, which I think may have inspired the visual feel of the hit television series, The Walking Dead.

A Girl Walks Home Alone At Night: I thought the vampire genre was done until I saw this Persian language film. I loved the direction and cinematography of this one; a truly unique film.

Dark Was The Night: Mysterious creature thriller starring Kevin Durand from The Strain television series. This has some great moments of suspense.

Odd Thomas: This is much lighter than most of the other films on this list. I loved that it was filmed in and around Santa Fe, New Mexico. It stars the late Anton Yelchin of the contemporary Star Trek films.

The Barrens: Is the Jersey Devil real? Stars Stephen Moyer from the True Blood television series.

The Descent: Cave exploration, claustrophobia and something unexpected. Highly recommend this one, but quite intense.

High Tension: Insanely intense French horror film with a surprise ending. Perhaps the most tense of all the films on this list.

Horror Express: A Spanish English language film from the early 1970s that stars Christopher Lee as an archeologist who makes a horrifying discovery. It reminds me of something I would have seen on Chiller Theater via WPIX in New York City.

Psycho Beach Party: The crashing of genres: a spoof of the horror and beach films of the 1960s. This one is a lot of fun.

Them: Another supremely intense French film. This one is based on a true story.

Wolves in the Snow: A French Canadian film about a woman who kills her husband only to find out that he has ties with the criminal underworld and now they are after her.

Remarkably, Amazon Prime did not have any films I would recommend.

For many, their first and only impressions of people unlike themselves is from television and movies. Images have mythic power and don’t require reading. So if you’ve spent most of your life only seeing Latinos and other people of color portrayed as maids and criminals, and have never had meaningful interaction, that can be your sole frame of reference. Unfortunately, even intellectuals are not immune to this. They should be; after all, their critical thinking skills should be far more developed.

My name is Tiffany Martínez. As a McNair Fellow and student scholar, I’ve presented at national conferences in San Francisco, San Diego, and Miami. I have crafted a critical reflection piece that was published in a peer-reviewed journal managed by the Pell Institute for the Study of Higher Education and Council for Opportunity in Education. I have consistently juggled at least two jobs and maintained the status of a full-time student and Dean’s list recipient since my first year at Suffolk University. I have used this past summer to supervise a teen girls empower program and craft a thirty page intensive research project funded by the federal government. As a first generation college student, first generation U.S. citizen, and aspiring professor I have confronted a number of obstacles in order to earn every accomplishment and award I have accumulated. In the face of struggle, I have persevered and continuously produced…

I am a native New Yorker and have lived through various post-war eras: the burnt-out, crime-ridden city of the 1970s; the thriving art scene of the 1980s; the Giuliani 1990s that essentially killed nightlife and, by proxy, the once thriving art scene of the 1980s; and the post 9-11 Bloomberg era that fostered the current state of crushing gentrification. One place I was hoping that would remain immune to the nightmare that is gentrification is Coney Island.

I have LOVED Coney Island for my entire life. The most interesting New Yorkers are not found on the Highline, but on the Coney Island boardwalk. Ten years ago, a close friend offered to take me out on my birthday. I said that I wanted to spend the day at Coney Island. He looked at me and said, “ I didn’t think you were the Six Flags type.” I replied, “You’re right, I am not. Coney Island is nothing like Six Flags.” My friend, who wasn’t from New York City, had never been to Coney Island. In short, he still occasionally  mentions our day there a decade ago. He came to understand what I love about Coney Island: unlike Six Flags, it is completely random, unexpected and uniquely a New York City experience.

I visited Coney Island in July 2016 after an absence of about three years. I was surprised by what I found: an Applebee’s opened as well as other “trendy” and “high end” establishments. I prefer the independent, mom and pop establishments that serve delicious knishes, cotton candy and corn on the cob. This past summer, I returned several times with my camera to capture the real Coney Island of real New Yorkers before it becomes indistinguishable from any other big box amusement park or worse, a resort for the rich. I lovingly present this photo essay of Coney Island, Summer 2016.

I was not the only one trying to capture the rhythm of life here.

Coney Island is not just about the sites, it offers a lot with regards to sounds and music. Deno’s Wonder Wheel Amusement Park, on most Friday nights during the summer months, hosts Karaoke and other musical talent contests. 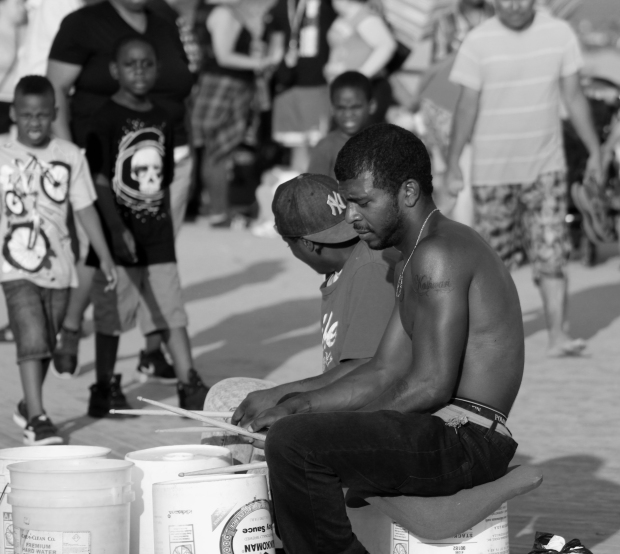 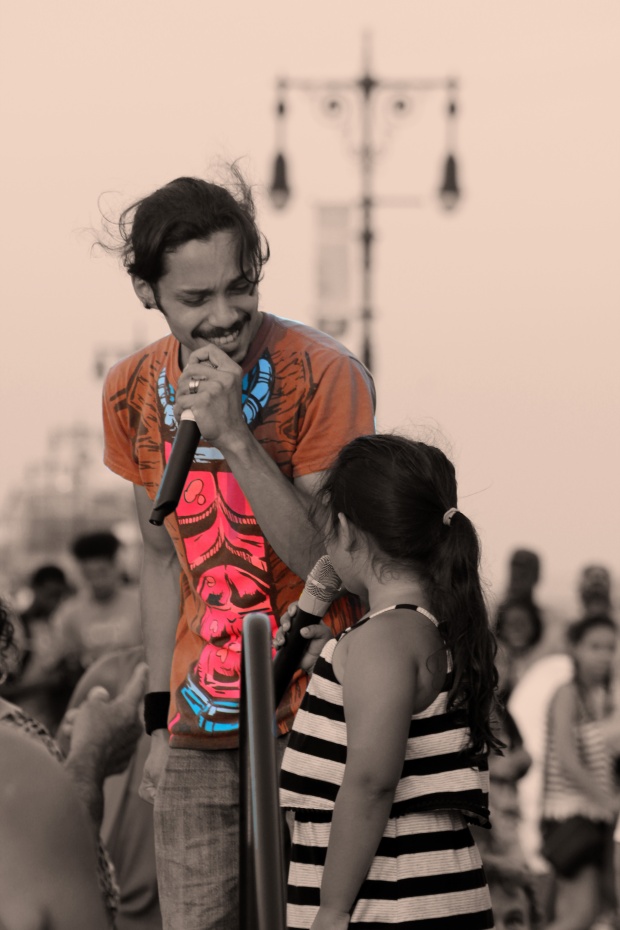 There is a lot to see and photograph. Rides, scenery and people! 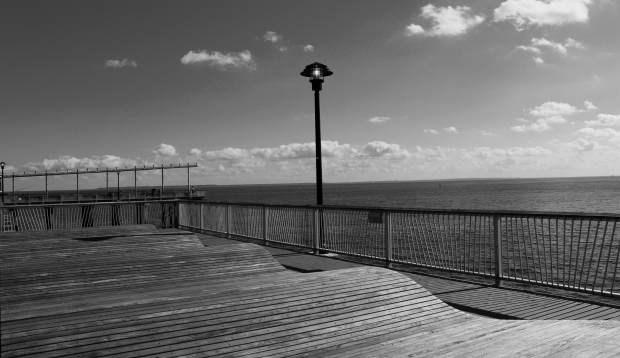 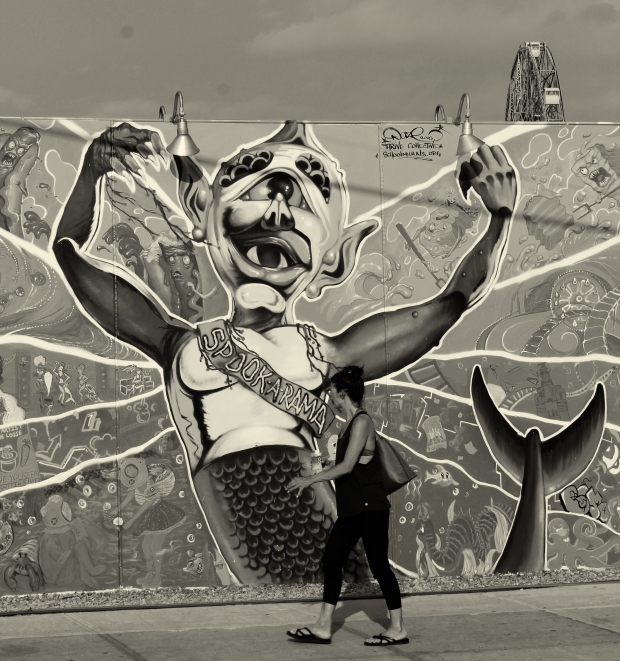 Sunset from the Top of the Wonder Wheel.

The most interesting aspect of Coney Island are the truly colorful people. 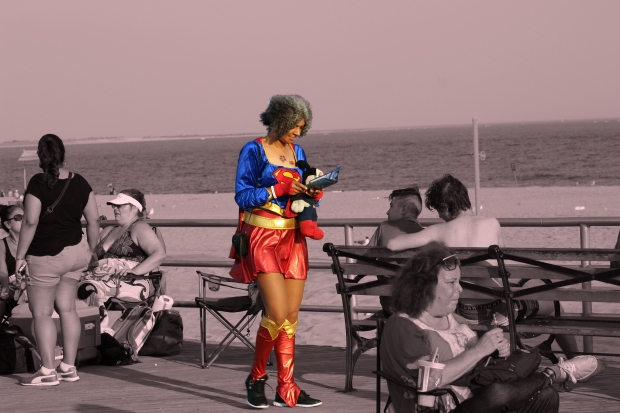 Chanel on the Boardwalk. 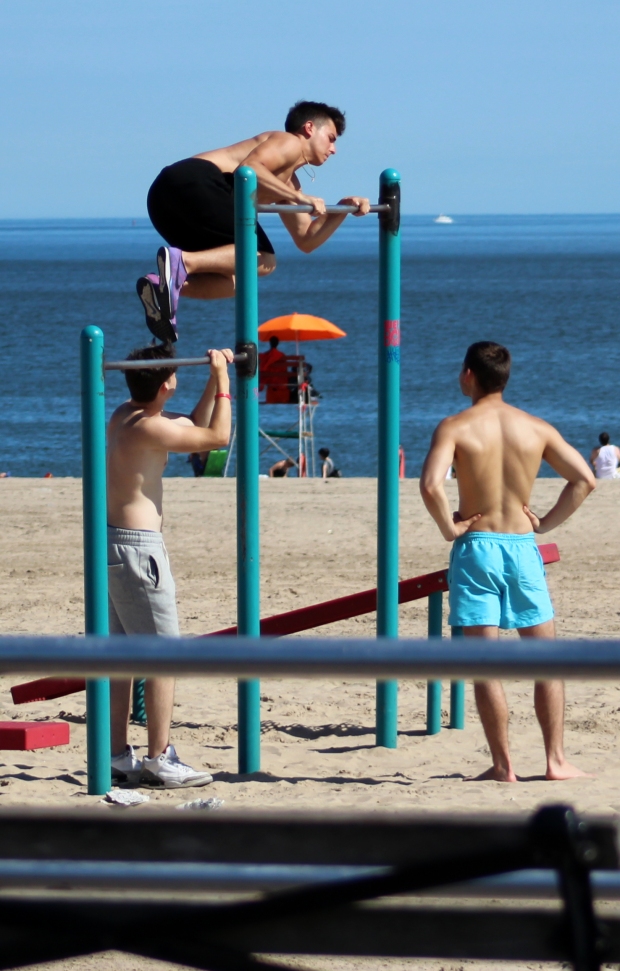 Parkour on the Beach.

I love this photo because it happened purely by chance: I framed it in such a way that only the last three letters of the word Cyclone appear with only one passenger on the ride. I was amazed when I got home and downloaded it. What are the chances? The first thought I had when I saw this was that sometimes you alone, are enough.