I grew up in the Northern Manhattan neighborhood of Inwood. It was a great place to grow up because it had architecture, interesting topography and a lot of character. What made it even better was that I had two uncles, both colorful characters, living within walking distance. My uncle Roberto lived two and half blocks away, and passed away in 2002, shortly after retiring; and my uncle George, who once lived in Marble Hill and passed away yesterday, one day before tRump — whom he loathed — took office. I learned of his passing while I was at an anti-tRump rally. Of everyone on my Mother’s side of the family, my uncle George was the one I felt most connected with.

My uncle George was a mixed bag of contradictions that somehow existed harmoniously. He was a dreamer and a pragmatist. He detested inanity and had no qualms conveying that, but was still tactful, patient and a first-rate communicator. He was once a driving instructor who taught me, but what I learned from him went beyond operating and navigating an automobile. From him I learned to explain the way things work. And even though he was not college educated, he was still well informed and exceptionally insightful. Most memorable was his amazing wit. I remember once driving him to JFK Airport and sitting in traffic for what seemed like an eternity and he looked at me and said, “They should blow up the whole airport and start over.” It was the way he said it that made it funny — not unlike Bea Arthur as the sarcastic Dorothy in The Golden Girls.

Like me, he loved comic books, fantasy novels, music and film. I remember many conversations with him revolving around these topics. I remember his remarkable record collection from the 1970s, which featured all the great musicians of the time. He once gave my mother the soundtrack to The Way We Were, which she played that year while we decorated our Christmas tree, a favorite childhood memory of mine.

Above all, my uncle George understood me. When my father died in 1994, he stood with me in the back of the funeral parlor and told me a funny story about the time they smoked pot together. He knew I wasn’t about the gloom and doom of death, but the celebration and humor of life. He knew that I needed to laugh at that moment. This is how I will always remember him: as someone who always got it and made the most of it.

Julieta is Pedro Almodóvar’s twentieth film and joins the pantheon of his best works. It was inspired by three short stories from the book by Alice Munro, Runaway, as well as the female-centric films of the 1940’s with hints of Hitchcock as well as Almodóvar’s own earlier works, most notably, his masterpiece, All About My Mother. One might even consider Julieta to be the 21st century All About My Mother.

The film traces three decades of the title character’s life. It starts with a middle-aged Julieta living in Madrid, with her boyfriend Lorenzo, and they are planning to move to Portugal. One day she runs into Bea, former best friend of her daughter Antia, who reveals that Antia, whom Julieta has not seen or spoken with in twelve years, is living in Switzerland and is married with three children. Julieta abruptly cancels the move, breaks up with Lorenzo, and moves to her former building, hoping that Antia someday communicates with her. Julieta, alone with her thoughts, starts to write her memories and her story is told in a series of flashbacks.

One of the most interesting things about Julieta is the double casting: Julieta in her twenties and early thirties is played by Adriana Ugarte, while in middle age is played by Emma Suárez. We witness what heartache and time can do to a person through Emma Suárez. Both actresses did amazing work, but I don’t think they were able to fully realize a powerhouse performance—they shared one. Had either actress solely portrayed the title character, the performance would have likely emerged as comparable to Cecilia Roth’s in All About My Mother. Speaking of performances, I want to note Rossy de Palma’s performance in this film: she amazingly “frumped” it up!

The final moments of Julieta actually address many of these questions in terms of the title character, but you may find yourself asking these of your own life. I think this is what makes the film great: it forces introspection and that is what stays with you.

As seen on the Staten Island Ferry and color splashed! 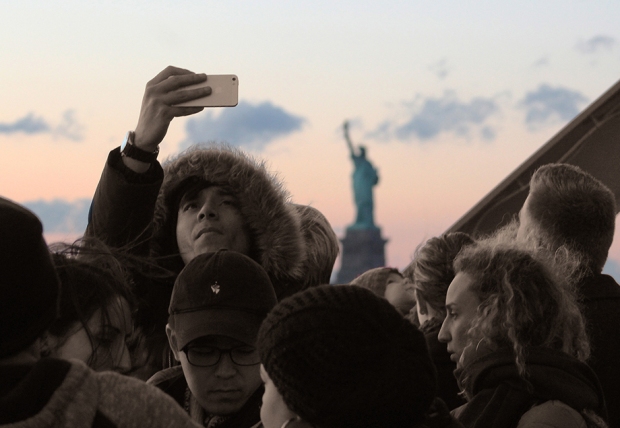