My cat Seven giving me some paw. 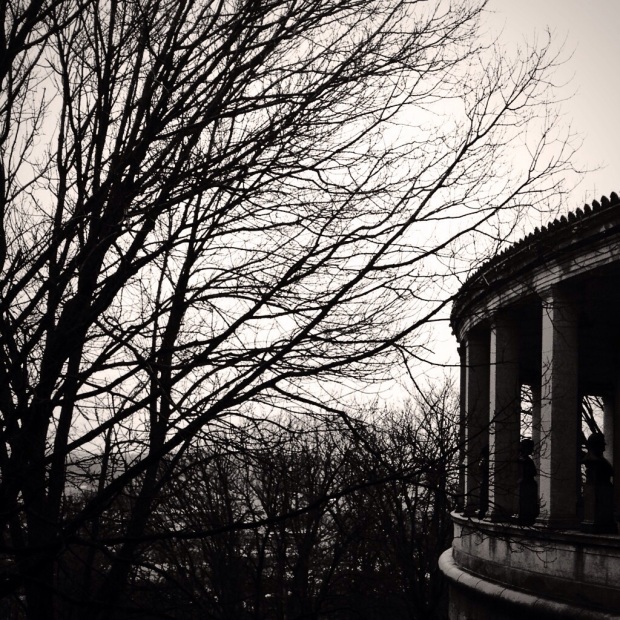 Musicians on a break at Arturo’s on Houston Street. NOTE: Their pizza and their jazz are masterpieces!

The third and final part of my detailed (well, detailed for a blog) look at the connection between paganism and early art.  If you haven’t read the first two parts, here are the links:

Saint Augustine writes that what is important is not whether the animals existed, but what they meant: the focus is clearly on doctrine. The Bible is filled with an assortment of stories involving animals, fantastic and real. In Joel 2, an army of locusts resembling horses appears, they shake the earth, darken the sky, and shoot out flames that burn everything in their path. In Revelation 5, a dead lamb with seven horns and seven eyes comes back to life. In Revelation 9:17, fire-breathing horses with the heads of lions appear wearing breastplates of jacinth and brimstone. In Revelation 13:1-3, a seven headed beast with ten horns comes out of the sea wearing ten crowns on each horn: it resembles a leopard but has the feet of a bear and the mouth of a lion. One of his heads dies, but it comes back to life. In Revelation 13:11, a beast with horns like a lamb and a voice like a dragon comes out of the earth. In Revelation 16:13, unclean spirits in the shape of frogs come out of the mouth of a dragon, a beast, and a false prophet.

Ezekiel, in Judaism, Christianity and Islam, is acknowledged as a prophet. Ezekiel has visions of four living creatures coming out of a cloud. Each creature shaped like a man, but each had four faces: the front face was human; the right was that of a lion; the left was that of an ox; and the back was that of an eagle (Ezekiel 1.4–14). Saint Jerome, translator of the bible, interpreted the human face as representing the rational part of man, the lion as the emotional, the ox as the appetitive, and the eagle as the spark of conscience by which we discern that we sin.

The griffin is a legendary creature with the body of a lion and the head and wings of an eagle. The griffin was thought to be an especially powerful and majestic creature because it combined the lion, considered the king of the beasts, and the eagle, the king of the birds. In antiquity it was a symbol of divine power and a guardian of the divine. George Chase noted that the Greeks borrowed the griffin from Asian art, but that the Greek griffins present a much livelier appearance than their Asian prototypes. The photograph on the right shows the head of a griffin from a Greek cauldron from the third quarter of 7th century BCE.

Head of a griffin from a cauldron, third quarter of 7th century BCE. Greek (from Olympia) Bronze
On Display at the Metropolitan Museum of Art

Griffins, in the ancient world, were symbols of royalty and protectors of the dead. They continued to play these roles for Christians. A popular legend in the Byzantine era told of griffins carrying Alexander the Great through the sky so that he could view his empire. The second photograph on the right shows carved griffins found on Byzantine tombs, where they may have been placed to identify the dead of royal status and to afford them protection. The design of the relief is similar to patterns on Byzantine and Islamic silks. 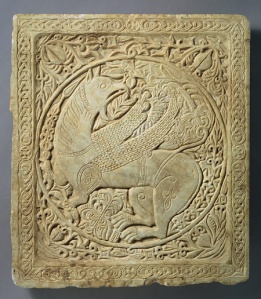 Panel with a Griffin, 1250–1300
Byzantine; Possibly from Greece or the Balkans
Marble
On Display at the Metropolitan Museum of Ar

Between the second and fifth centuries19 CE an unidentified Christian writer compiled a book about animals, some of them fantastic, drawing on the work of pagan predecessors, but adding allegory. The Physiologus was comprised of fifty allegories in which each entry began with a biblical quotation, followed by a description of the animal which might be whimsical, followed in turn by an analogy or moral which would instruct the reader in some Christian truth.

The Physiologus was condemned as heretical in 469 A.D. by Pope Gelasius, but his ban had no real effect, as later Christian writers quoted from and even added to it. The photo below is of the Bern Physiologus, which is a 9th century copy of a 5th century manuscript of the Latin translation of the Physiologus. Many of its miniatures are set, unframed, into the text block, which was a characteristic of late-antique manuscripts. It is one of the oldest existing illustrated copies of the Physiologus. In the later Middle Ages, three works stand out as noteworthy in animal lore: De proprietatibus rerum by Bartholomaeus Anglicus; De apibus by Thomas of Cantempre’; and the Speculum aturale by Vincent of Beauvais.

The Bern Physiologus is a 9th century illuminated copy of the Latin translation of the Physiologus. About 825-850.

From books like Charlotte’s Web (an allegory for true friendship) to films like Godzilla (an allegory against the use of nuclear weapons) and Over the Hedge (an allegory about the effects of deforestation) animals play a part in telling mankind’s story: they stand in for humans in allegories and take the place of people in morality stories. The personification of animals is so common that we inherently accept animals as representatives for human behavior. Mankind, as the dominant species on the planet, should take better care of their cohabitants.

In Animals in Art and Thought, Francis Klingender writes, “neither the real relationship between men and beasts, nor the symbolic meanings attached at various times to beasts should be neglected to interpret the ever-changing forms of animal art.”

From The Met’s video series, 82nd and Fifth, “Bricks”: http://82nd-and-fifth.metmuseum.org/bricks

From The Met’s video series, 82nd and Fifth, “Drama”: http://82nd-and-fifth.metmuseum.org/drama 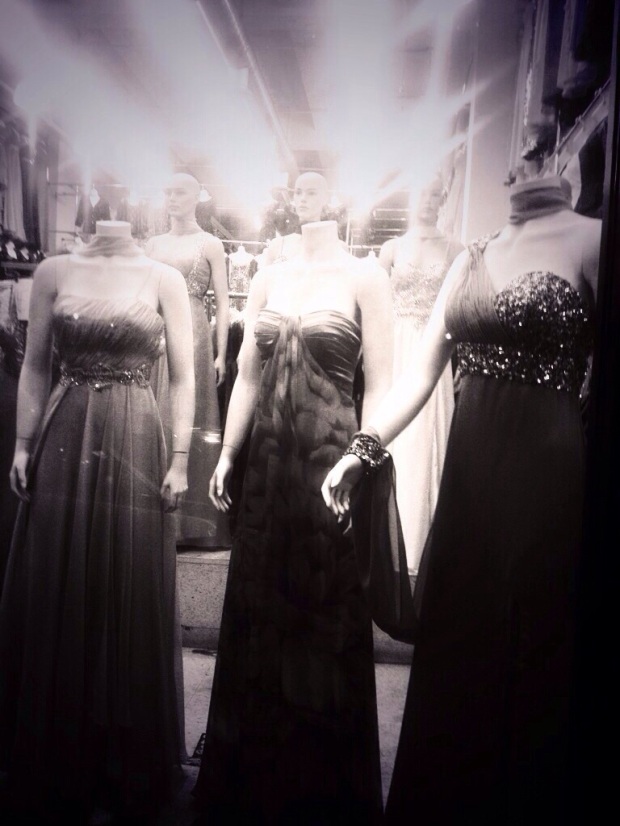 These Beautiful “Place-Hacking” Photos Will Give You an Adrenaline Rush

They call themselves “place hackers”—urban adventurers who get a thrill (and bragging rights) from exploring forbidden spaces: old military bases, sewer systems, decommissioned hospitals, power stations—even the odd skyscraper under construction. Just like backpackers, they have an ethical code: no vandalism or theft, take only photographs, leave only footprints. “The idea behind urban exploration is revealing what’s hidden,” explains Bradley Garrett, author of the recent book Explore Everything: Place Hacking the City.  “It’s about going into places that are essentially off limits and, because they are off limits, have been relatively forgotten.” The goal is not just to explore, he adds, but to document and share as well. To wit: Check out these 12 amazing photos from Garrett’s book. 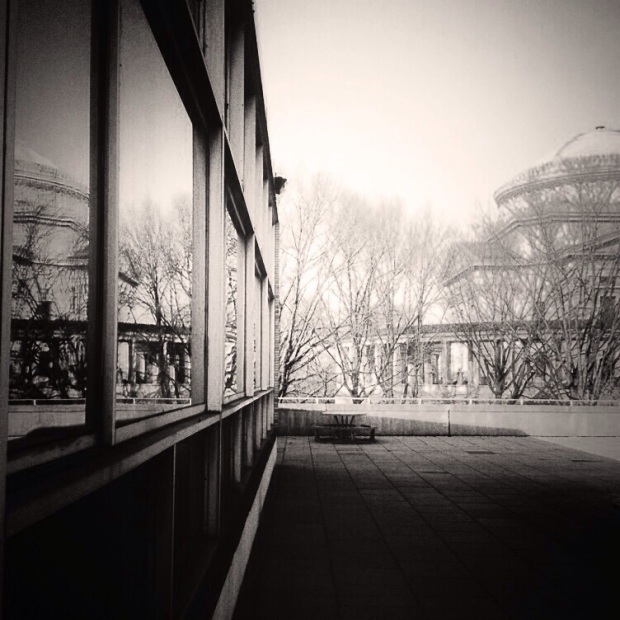