My love affair with comics began in the late 1970s with the television series Wonder Woman: it was because of Lynda Carter that I picked up a comic book! I remember the first issue I ever read where Wonder Woman said things like, “Great Hera” and “Merciful Minerva.” This intrigued me because I was learning about Greek mythology in school. I became enamored with all things Greco-Roman and read Wonder Woman to find the connections in the architecture of Paradise Island (I had already looked up the Greek column orders in the encyclopedia) or the Greek Gods and Goddesses the Amazons worshiped (I remember noting an inconsistency with regards to how she would sometimes use the Roman names for Greek Gods and vice-versa).

About one year after I started watching Wonder Woman, the now classic Superman: The Movie came out and it cemented my bond with comic books: I can still recall the joy and excitement I felt watching that film in the Valentine Theater on Fordham Road. I then started to regularly read Action Comics, All Star Squadron, Detective Comics, Justice League, Teen Titans and, of course, Wonder Woman. I also became a life long fan of artists like Jerry Ordway and George Perez.

I stopped reading comics when I started college in 1985 because I couldn’t afford the time or the money. I did, of course, see films and television shows based on my favorite comic book heroes. I started to read comics again because of Christopher Nolan’s Dark Knight trilogy and DC’s 2011 reboot of all their titles and characters known as The New 52. Some recommended reading from the New 52 includes the first 24 issues of Batwoman (the artwork of J.H. Williams III is nothing short of thrilling), Earth 2, Gail Simone’s run on Batgirl, Batman (the Court of the Owls story line) and Justice League. Another great read is the graphic novel Superman: Earth One, which clearly had a major influence on 2013’s Man of Steel.

Man of Steel was a good film, but it wasn’t great. I am not sure if it will age as well as the Dark Knight films. I liked the origin story, the portrayal of Krypton and Henry Cavill in the title role, but I agree with critics regarding the over-the-top, Michael Bay destruction of Smallville and Metropolis. Interestingly, this is exactly where Batman v. Superman: Dawn of Justice starts. (Note: if you have not seen Man of Steel, and intend on seeing Batman v. Superman, you must see the former to understand plot elements of the latter.)

The opening moments of Batman v. Superman recounts Superman’s battle with Zod from the street level. These scenes are quite haunting and bring some much-needed humanity to those over-the-top battle scenes from Man of Steel while effectively setting up the animosity that Batman harbors toward Superman for most of the film. What follows is a relatively action-free hour that explores the film’s central theme: can absolute power (Superman) be trusted? Director Zak Snyder also lightly touches on other themes like media manipulation, money in politics and journalistic responsibility.

Snyder excels with the superhero, comic book come-to-life imagery (as he brilliantly did with Watchmen). He clearly took images and ideas from the pages of the comics that those who don’t read comics may not recognize (see below). However, he does it at the expense of the film’s pacing. There are also too many plot elements and plot holes, which CinemaSins is going to have a real feast with. Some of the biggest plot holes stem from character motivation. I also think it was a mistake to reveal the Doomsday character in the trailers; his reveal in the film would have been a great moment for the collective audience experience.

From the film and from the graphic novel, Damian: Son of Batman 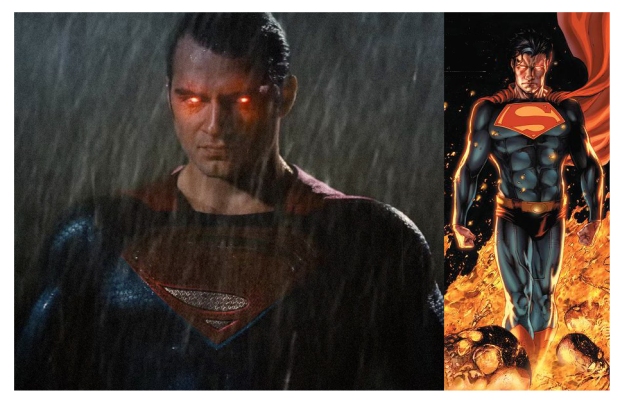 From the film and from the graphic novel, Superman: Earth One

Casting was outstanding. Ben Affleck does an excellent job playing Bruce Wayne and Batman. Affleck’s physique in this film is impressive–he is a walking wall of muscle! Also, watching him use all of the Batman gadgets was a lot of fun. Gal Gadot, who plays Diana Prince / Wonder Woman is a revelation—even when she is not in costume as Wonder Woman, she commands your attention! I overheard a lot of chatter from fellow audience members afterward and everyone loved her portrayal. One of my favorite moments in the film was when Wonder Woman used her golden lasso—it beautifully glowed as it does in the comics! I am really looking forward to the Wonder Woman film next year!

Batman v. Superman is fantastic visually and the action scenes are engaging, but overall the film is not as thoughtful as it could have been. For the upcoming Justice League films, Snyder needs to reel in the action a bit and give the audience more credit for being able to think. After all, Comic book fans are quite thoughtful and imaginative.