Growing up, I thought that trolls were repugnant fabled creatures that lived under old stone bridges and came out at night to scare children. As an adult, I am surprised to find that variations of the troll actually exist in daily life! You have probably had dealings with them too. Examples include:

And then there is that troll who unfortunately has an outsized presence in the modern world: The internet troll. You know who they are, that sub-human who uses cyberspace, often anonymously, to aggravate and defame others. Social media has been a boon to this obnoxious individual, most notably for those who support conservative viewpoints. I avoid contact with these creatures of vitriol who sustain an intra-cerebral mythos of greatness and domination. I recently fell into a trap with one and wanted share my experience and suggestions for dealing with these little punks.

It started back in December 2017 when he replied to a retweet I posted from Senator Dianne Feinstein.

Shortly after he started following me. When I noticed it in my notifications, I remembered thinking, “Okay, I am being followed by a long-dead silent film actor.” His profile picture and name is that of actor John Gilbert, who died in 1936. This is a red flag that you are likely dealing with a troll: they don’t use their own pictures and/or their own names. Now John Gilbert could be his name, but that is definitely not his picture. You have to wonder what and why is he hiding? All of my social media accounts use my name and picture and are connected to my website.

After following me, La Gilbert would swoop in on to my Twitter feed and comment and every now and then. And I always ignored it—which is exactly what you should do with trolls: don’t respond!

Then one day I retweeted something from Black Lives Matter and he replied with an utter lie. I replied with this simple statement: 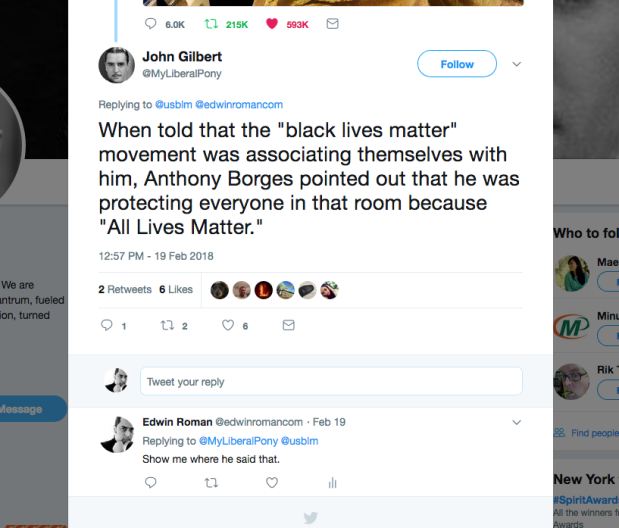 No response. Instead, he oddly chose to retweet a retweet of mine from Neil deGrasse Tyson. Classic deflection—very tRump-esque!

Then the Stoneman Douglas High School massacre happened and I became very engaged in social media conversations on it. Then La Gilbert replied to this retweet:

I responded by providing several viable sources. He then replied with the following and you can see my reply, which was a mistake. I did exactly what he had been waiting for months for me to do. 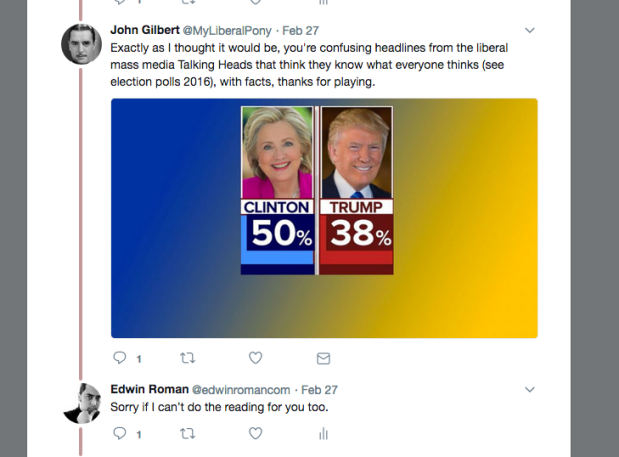 He then replied with this.

How did he even know I have cats, unless he was indeed following me? Or even more creepy, has he stalked me beyond Twitter? And what is with that Metrosexual dig? Interestingly, a friend was following the discussion and hilariously noted, “Wow, he really has a hard-on for you!” I replied with:

He then must have had a mental nuclear meltdown, because the first thing he did was un-follow me and reply with the following: 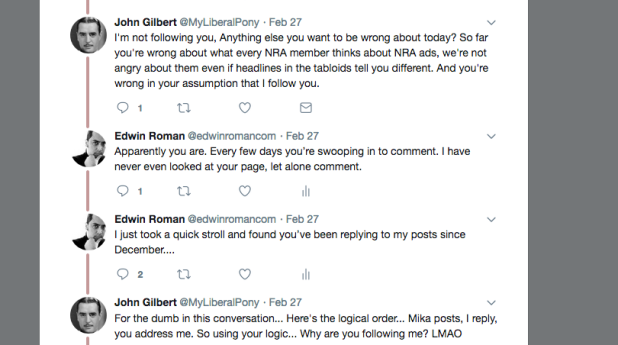 Anyway, he would to on the post on his wall how he took me down. Chest thumbing at its worst. He then oddly pinned his own response to his remark on that earlier retweet I posted from Black Lives Matter. 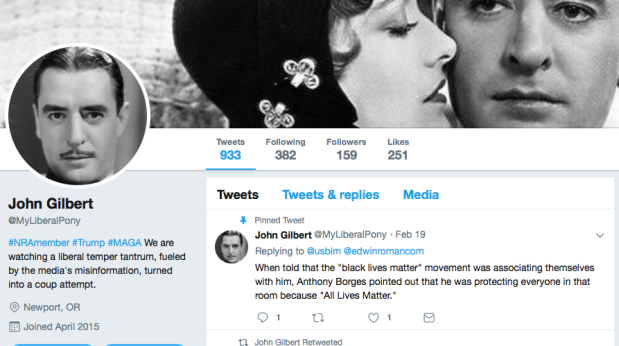 On to the postmortem denouement.

In order to attack others, trolls need one or more victims and a public forum because they need an audience. While you can’t control whether you will become a troll’s target, you can decide if you will make yourself a troll’s victim. Knowing that the troll’s goal is to demean, you have a choice regarding how you are going to react. Understand that where there’s one troll, there may be many more waiting to follow up on what the first troll started.  This just means there may be more than one troll that needs ignoring. And ultimately, that is my recommendation: ignore them. Don’t feed the troll. Don’t try to be clever, just ignore them. They can not be reasoned with—especially if they support conservative viewpoints.

A fair question regarding this blog entry would be if I am indeed feeding the troll. Not exactly. First and foremost, this is on my blog and I am not responding directly to anything he posted. Second, I am not going to let La Gilbert know that I have written it. I also did not hyperlink his account to this entry. If he stumbles on to it, it is because he is indeed following me. If he retweets it, then this publicly debunks his own assertions that he was not following me. This blog entry presents quite the conundrum for the attention hungry La Gilbert.  He probably will be unable to stay silent. We will see.

I don’t know about you but I have had more than my fill of trolling liars.