Camille Paglia, in her book, Sexual Personae, presents an interesting theory on the relationship between cats and ancient Egyptians. Cats, which have a sense of narcissistic personality and ceremony, were the model for Egyptian culture. According to Paglia, Egyptians invented concepts of beauty and femininity from their observations of cats 1. I found this theory thought provoking and would, for years after first reading Sexual Personae, look for other examples of how animals can impact a culture. A favorite example are the Aztecs, who according to legend, founded the city of Tenochtitlan when their god Huitzilopochtli had commanded them to find an eagle perched atop a cactus, devouring a snake.

Paglia makes an interesting contrast between Egypt and Greece: In Egypt, the cat; in Greece, the horse. Another way to view it is, in Egypt, the Sphinx; in Greece, the Centaur. Paglia hypothesizes that cats were “too feminine for the male loving Greeks” who preferred to depict the more muscular horse in art 2.  Paglia’s theory appears to be realized on an Archaic helmet from the late 7th century B.C.E. where a horse and two lions (one on each cheek piece) are portrayed in repoussé; the horse is about three times larger than the lions.  Conversely, Egyptian depictions of horses appear to be more feminine than Greek muscular / masculine forms (figure III). 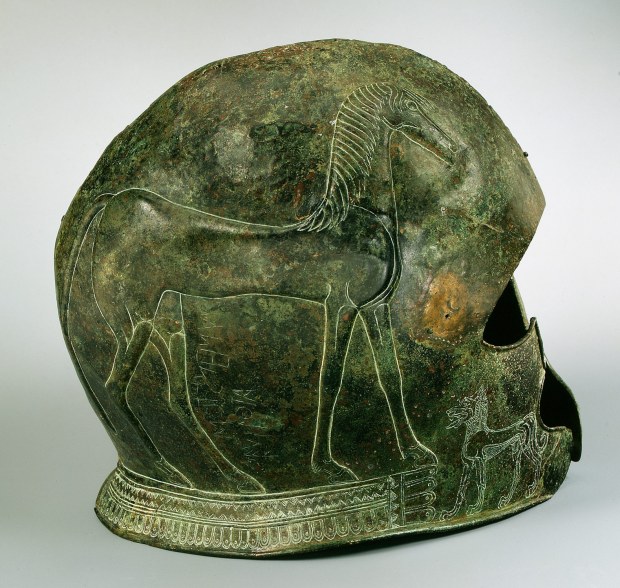 The ancient Greeks rarely depicted contemporary or historical events in art.  However, horses were consistently present in mythical and historical depictions alike.  This blog entry will examine the presence of the horse in narratives depicted on various Greek works.

Ancient Egyptians venerated cats and mummified them. The practice of interring horses was not uncommon in Greece 3 (a pair of horses were discovered buried at the outer end of a Stholos tomb at Marathon (The Mycenaean tholos tomb consists of a circular, subterranean burial chamber, sometimes referred to as the thalamos, roofed by a corbelled vault and approached by an entrance passage that narrows abruptly at the doorway actually opening into the tomb chamber. The chamber or thalamos is built of stone.  Tholoi of this kind are usually set into slopes or hillsides. Burials were either laid out on the floor of the tomb chamber or were placed in pits, cists, or shafts cut into this floor.); a human skeleton was discovered with a horse skeleton in a grave near Nauplia). Like the cat in Egypt, Horses were also featured prominently in works connected to funerary traditions. A Geometric krater, (740 B.C.E.) from the Dipylon Cemetery,

that functioned as a grave marker, depicts scenes of mourning for a man; the horses are pulling a chariot in his honor 4.  One theory suggests that the horse with chariot was a transporter to the afterlife 5.  The practice of depicting horses on grave markers continued to be common into the late classical period.  Several loutrophoros vessels, which were used as grave markers for soldiers, depict young men on horseback 6.  Ancient Greek citizens were required to perform a number of duties to help serve their community in the best way possible; soldiers saw the act of war as an act of patriotism.  The depictions may be viewed as a commemoration of the solider and horse.  The horse is as proud as a soldier, but unlike donkeys, cows, or bulls, is decidedly trainable and will, with no hesitation, ride into battle.  Horses are in line with the concept of unselfish Greek citizenship (unlike cats, which are self-serving animals).

Depictions of horses were not solely limited to krater or loutrophoro vessels.  A black figure terracotta amphora (Figure V) depicts a departing warrior on a four-horse chariot bidding his parents farewell.  Interestingly, one of the four horses are not depicted in black figure, actually matching the color of the charioteer, also not in black figure.  It is also curious that the charioteer was in the foreground while the solider and his family was in the background and behind the chariot.  Could this have also been a commemoration of charioteer and horse for their contributions to the cause?

The horse, featured prominently in pottery narratives depicting combat and death, is also a fixture in mythology. One of the most remarkable works of a mythological subject prominently featuring a horse may be found at the Boston Museum of Fine Arts, which I had the opportunity to visit earlier this year.  The museum identifies the work as a  rhyton in the form of a mounted Amazon.  Another source identifies this same work as a  plastic vase 7.  The mounted figure wears a crested plume helmet with large appendages on the sides. The red figure vessel behind the Amazonian warrior depicts four figures, Persians and Greek, in combat.  A Persian figure is mounted on a horse and appears to be overtaking a Greek warrior with a spear.  Conveniently, the Amazon’s plume is bellowing on to the scene.  However, it is interesting to note the striking difference between the Persian and Greek horses; the Greek horse that the Amazon is riding is muscular, while the Persian horse appears to be almost Rubenesque and not proportionate.  The Greek horse also has a gait / gallop similar to the horses depicted on the Parthenon frieze, which is a somewhat curious because the Amazonian rhyton was found in Egypt. 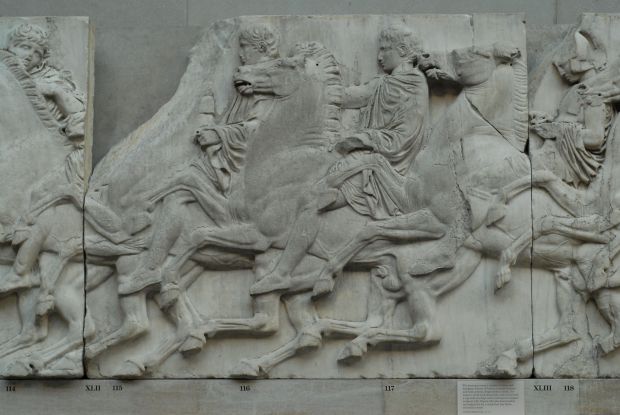 The frieze on the Parthenon is thought to represent the Panathenaic procession, a religious festival held on 28 Hekatombaion, the first month of the Athenian calendar 8 .  The presence of the horse on the frieze of the Parthenon clearly demonstrates their importance in Greek society, real and mythological.  According to mythology, Poseidon desired Demeter and to put him off, Demeter asked Poseidon to make the most beautiful animal the world had ever seen.  Poseidon created the horse.  The horses represented on the frieze are based on the Greek ideal perfect proportions.  Beauty and proportion are bedfellows in ancient Greece.

One part of west frieze of the Parthenon depicts horsemen preparing their horses.  The care that the horsemen appear to be giving their horses recalls one of the first manuals on riding the horse titled The Art of Horsemanship written by a Greek named Xenophon.  Xenophon, who was a pupil of Socrates, was an equestrian for his entire life, first as a cavalryman and then as a country gentleman on an estate given to him by the King of Sparta 9.  Xenophon, in the same manual, encourages a mutual respect between man and horse: “There are, indeed, other methods of teaching these arts.  Some do so by touching the horse with a switch under the gaskins.  For ourselves, however, far the best method of instruction, as we keep repeating, is to let the horse feel that whatever he does in obedience to the rider’s wishes will be followed by some rest and relaxation.”

Xenophon’s approach to horse care and training appears to be realized on a kylix in the Met attributed to Amasis painter.  The reverse depicts an atmosphere of excitement in Poseidon’s stables, while four grooms attempt to soothe four high-strung horses.  The obverse depicts Poseidon among Greek warriors.  The subjects are drawn from book 13 of Homer’s Iliad: Poseidon, seeing the Greek soldiers hard pressed, decides to renew their spirit.  Prior to viewing this work, I happened to view a Terracotta pykster (figure IX) that depicted soldiers mounted on dolphins.  I found it curious that the scene on the pykster depicting the dolphins was not a work connected to the god of the sea, Poseidon.  Instead, the pyskster chose to depict Poseidon’s most beautiful creature, the horse.

Horses were an integral part of ancient Greek culture. Horses resemble the Greek ideal human form in terms of proportion and musculature.  “Coming to the thighs below the shoulder blades, or arms, these if thick and muscular present a stronger and handsomer appearance, just as in the case of the human being” 10.

Horses are also in line with Greek concepts of citizenship.  “Such an animal, we venture to predict, will give the greatest security to his rider in the circumstances of war.”10

“The majesty of men themselves is best discovered in the graceful handling of such animals.  The man who knows how to manage such a creature gracefully himself at once appears magnificent.  A horse so prancing is indeed a thing of beauty, a wonder and a marvel; riveting the gaze of all who see him, young alike and graybeards.  They will never turn their back, I venture to predict, or weary of their gazing so long as he continues to display his splendid action.  Such are the horses on which gods and heroes ride, as represented by the artist.”

– Xenophon, The Art of Horsemanship